The task of MOT (Multiple Object Tracking), or MMT (Multiple Target Tracking), is largely partitioned to locating multiple objects, maintaining their identities, and yielding their individual trajectories given an input video.

Compared with Single Object Tracking (SOT), which primarily focuses on designing sophisticated appearance models and/or motion models to deal with challenging factors such as scale changes, out-of-plane rotations and illumination variations, MOT additionally requires two tasks to be solved: determining the number of objects, which typically varies over time, and maintaining their identities.

Apart from the common challenges in both SOT and MOT, further key issues that complicate MOT include among others:

Differences from Other Related Reviews

Following the most commonly used tracking-by-detection, or Detection Based Tracking (DBT) paradigm, utilize $\o_t^i$ to denote the collected observations for the $i$-th object in the $t$-th frame, $\O_t=(\o_1^1,\o^2_t,\ldots,\o^{M_t}_t)$ to denote all the collected sequential observations of all the objects from the first frame to the $t$-th frame.

The object of multiple object tracking is to find the “optimal” sequential states of all the objects, which can be generally modelled by performing MAP (maximal a posteriori) estimation from the conditional distribution of the sequential states given all the observations

Different MOT algorithms can be thought as designing different approaches to solving the above MAP problem, either from a probabilistic inference perspective or a deterministic optimization perspective. 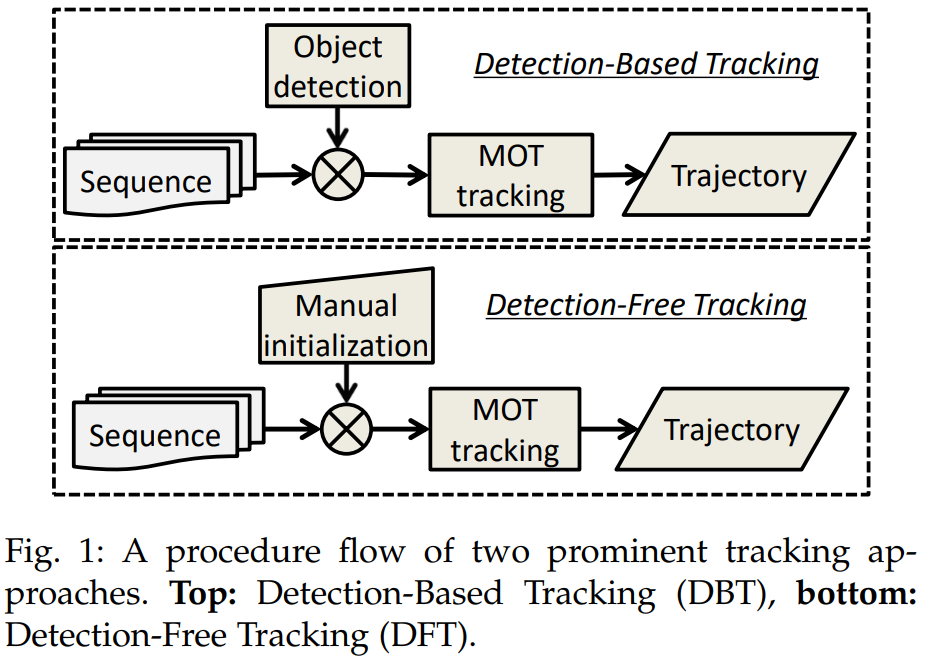 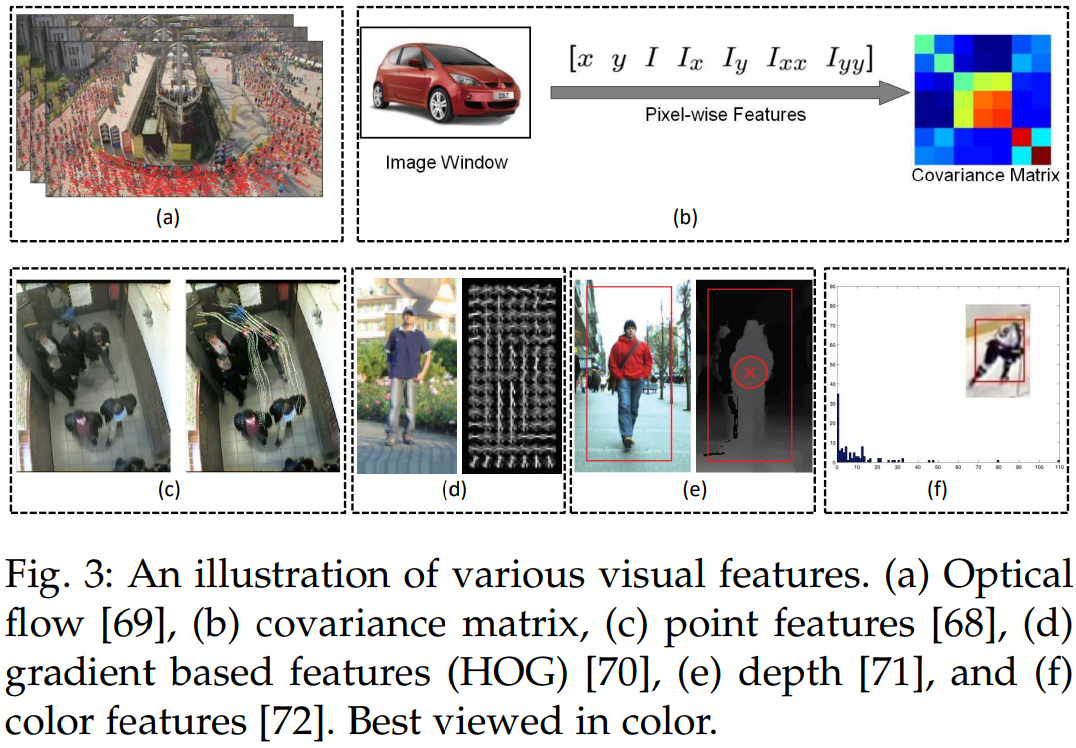 The motion model captures the dynamic behavior of an object. It estimates the potential position of objects in the future frames, thereby reducing the search space.

where the summation is conducted over $N$ frames and $M$ trajectories/objects.

Also known as group models. In these models, each object is considered to be dependent on other objects and environmental factors. This type of information could alleviate performance deterioration in crowded scenes. Specifically, in social force models, target behavior is modeled based on two aspects, individual force and group force.

Motion patterns are introduced to alleviate the difficulty of tracking an individual object in the crowd. In general, this type of models is usually applied in the over-crowded scenario where the density of targets is considerably high.

perhaps the most critical challenge in MOT. A primary cause for ID switches or fragmentation of trajectories.

this strategy is built on the assumption that a part of the object is still visible when an occlusion happens.

the popular way is dividing a holistic object into several parts and computing affinity based on individual parts.

generate occlusion hypotheses and then test it

Approaches based on probabilistic inference typically represent states of objects as a distribution with uncertainty. The goal of a tracking algorithm is to estimate the probabilistic distribution of target state by a variety of probability reasoning methods based on existing observations.

This kind of approaches typically requires only the existing, past and present observations, thus they are especially appropriate for the task of online tracking. As only the existing observations are employed for estimation, it is naturally to impose the assumption of Markov property in the objects state sequence, which has two aspects:

Approaches within this framework are more suitable for the task of offline tracking. Given observations (usually detection hypotheses) from all the frames, these types of methods endeavor to globally associate observations belonging to an identical object into a trajectory. The key issue is how to find the optimal association.