Consider a term called root, $R_n(X^n, \theta(P))$, which is just some real-valued functional depending on both $X^n$ and $\theta(P)$. The idea is that a CI for $\theta(P)$ could be constructed if the distribution of the root were known.

In order to get around the non-continuity and non-strictly-increasing problem, define

Outside certain exceptional cases (TODO), the bootstrap approximation $J_n(x,\hat P_n)$ cannot be calculated exactly. Typically, we resort to a Monte Carlo approximation to $J_n(P)$, conditional on the data $X^n$, for $j=1,\ldots,B$, let $X_j^{n*}$ be a sample of $n$ i.i.d. observation from $\hat P_n$, which is also referred to as the $j$-th bootstrap sample of size $n$. When $\hat P_n$ is the empirical distribution, this amounts to resampling the original observations with replacement. 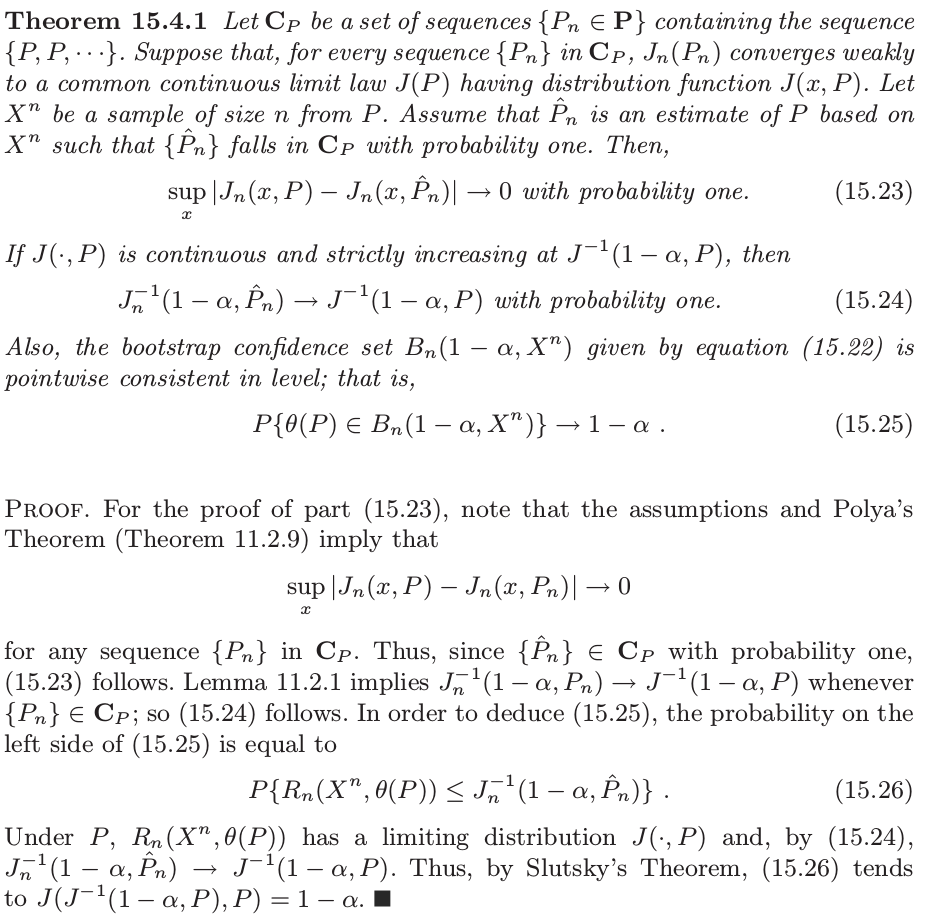 where $Z_n$ is the normalized score vector

It may difficult to calculate the limiting variance $\sigma_\theta^2$, then one can use the approximation

which can be poor. Then we can consider bootstrap method, use the approximation $J_n(x,\hat\theta_n)$, which is differ from the above $\widehat{\lim J_n(x,\theta)}$.

In the introduction of the section of Bootstrap method in Lehmann & Romano (2005), it said,

So it sounds like the bootstrap procedure is more general than the permutation test, but I have not read the section about permutation test (TODO). Here I try to compare them in terms of test statistic.

To compare two group means with $\sigma_1=\sigma_2$, a natural test statistic is

(here the denominator $se$ is omitted) In the permutation test, we propose

More deep comparison with permutation test can be found in the one year ago’s post. I feel very guilty, I didn’t realize that I wrote such staff until I found there are two posts has the “bootstrap” tag.