the paper proposed an integrative Bayesian analysis of genomic data (iBAG) framework for identifying important genes/biomarkers that are associated with clinical outcome.

The expression level of a gene 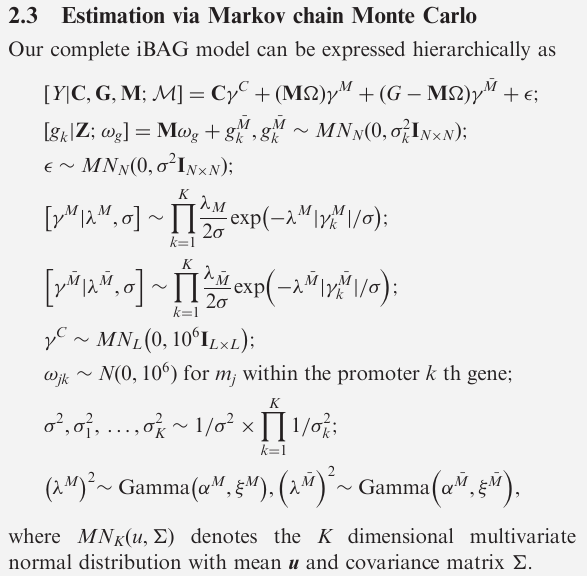 for each MCMC sample, compute the (conditional) MAP estimate of $\gamma_s^M, \gamma_s^{\bar M}$

estimate the posterior probability of significance $(p_k^M, p_k^{\bar M})$ by computing the (empirical) frequencies of the nonzero elements in the MAP estimates for each gene $k$.

in this framework, $(1-p_k^M)$ and $(1-p_k^{\bar M})$ can be interpreted as estimates of the local FDR or Bayesian $q$-values. Thus, given a desired global FDR $\alpha$, we can determine a threshold $\phi_\alpha$ to use in flagging the set of genes ${k:p_k^M\ge \phi_\alpha,\text{or} p_k^{\bar M}\ge \phi_\alpha}$ as significant genes associated with the clinical outcome.

two versions of the iBAG model

compare with two other models