This post is mainly based on Hastie, T., & Stuetzle, W. (1989). Principal Curves. Journal of the American Statistical Association.

Principal curves are smooth one-dimensional curves that pass through the middle of a $p$-dimensional data set, providing a nonlinear summary of the data.

Type of summary for the pattern exhibited by the points on two variables:

Formally, define principal curves to be those smooth curves that are self-consistent for a distribution or data set. This means that if we pick any point on the curve, collect all of the data that project onto this point, and average them, then this average coincides with the point on the curve.

The largest PC line can be used in several situations

where $\bfu_0 + \bfa\lambda_i$ is the systematic component and $\bfe_i$ is the random component.

A natural generalization is the nonlinear model,

A one-dimensional curve in $p$-dimensional space is a vector $\bff(\lambda)$ of $p$ functions of a single variable $\lambda$. These functions are called the coordinate functions, and $\lambda$ provides an ordering along the curve.

The vector $\bff’’(\lambda)$ is called the acceleration of the curve at $\lambda$, and for a unit-speed curve it is easy to check that it is orthogonal to the tangent vector. (TODO: to check) Here is an explanation from classical mechanics, 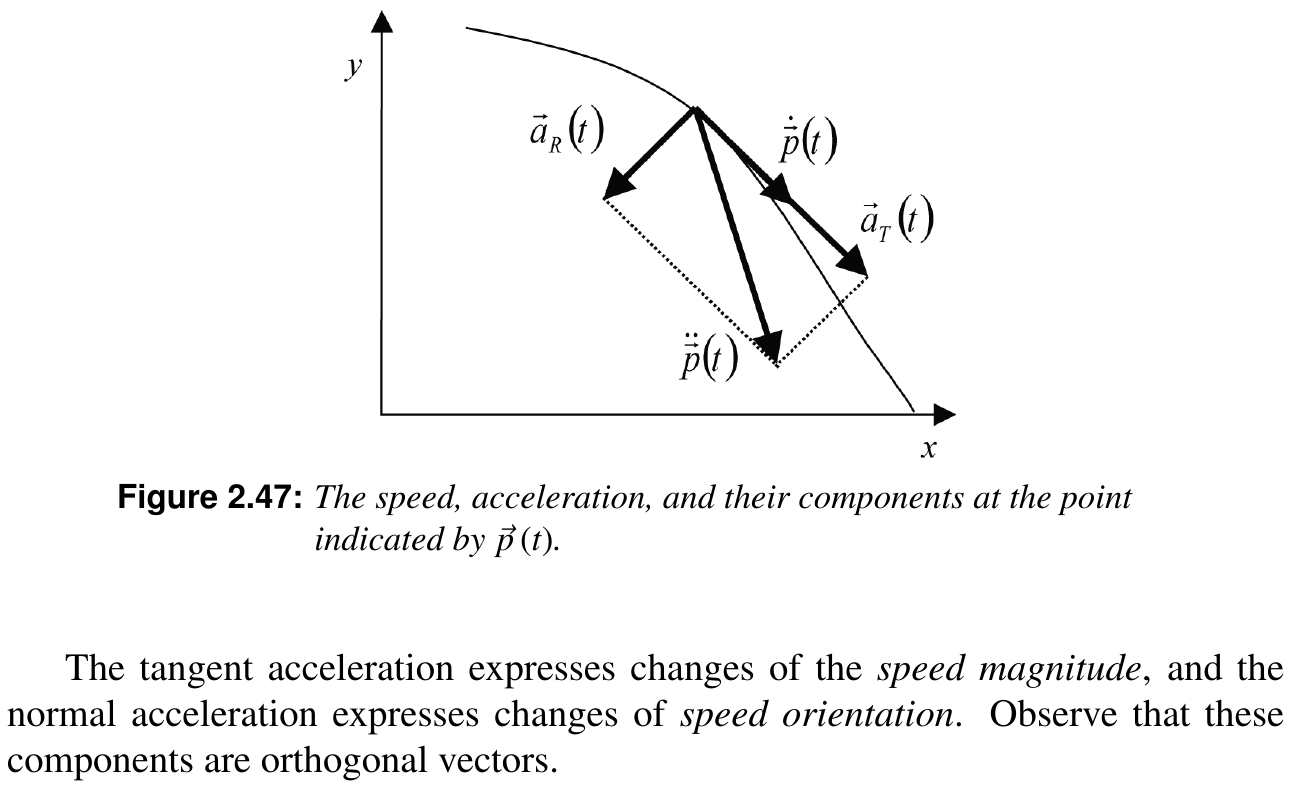 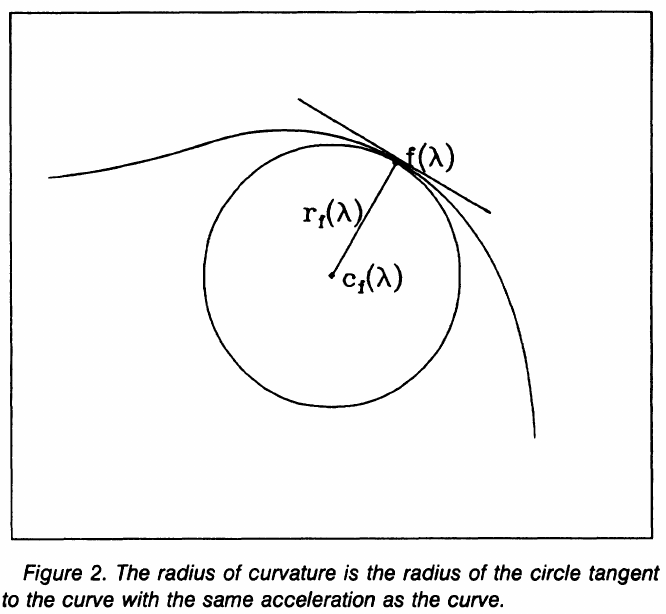 Denote by $\bfX$ a random vector in $\IR^p$ with density $h$ and finite second moments. Without loss of generality, assume $\E(\bfX) = 0$. Let $f$ denote a smooth $C^\infty$ unit-speed curve in $\IR^p$ parameterized over $\Lambda \subset \IR^1$, a closed (possibly infinite) interval, that does not intersect itself ($\lambda_1\neq \lambda_2\Rightarrow f(\lambda_1)\neq f(\lambda_2)$) and has finite length inside any finite ball in $\IR^p$.

The principal curve is biased for the functional model $\bfX=\bff(\lambda)+\bepsilon$ with $\bff$ smooth and $E(\bepsilon) = 0$ since $\bff$ generally seems not to be a principal curve.

A distance property of principal curves

Bias in a simple model

Consider a unit speed curve $f(\lambda)$ with constant curvature $1/\rho$, where $\rho$ is the radius of the circle,

Let $f(\lambda), \lambda\in \Lambda_f$ be the arc of a circle as described above. The parameter $\lambda$ is distributed uniformly in the arc, and given $\lambda$, $x=f(\lambda)+e$ where $e$ are iid with mean $0$ and variance $\sigma^2$. Concentrate on a small arc $\Lambda_\theta$ inside $\Lambda_f$, and assume that the ratio $\sigma/\rho$ is small enough to guarantee that all the points that project into $\Lambda_\theta$ actually originated from somewhere within $\Lambda_f$. Then

Suppose $\lambda_f = \pi\rho$. (A full circle.) The radius of the circle, with the same center as $f(\lambda)$, that minimizes the expected squared distance to the points is

For a given point $x$, the squared distance from a circle with raidus $r$ (the radial distance) is

The maximum is achieved by differentiating w.r.t. $r$,

Suppose $\lambda$ corresponds to an angle $z$, then

The result of the above bias is that, suppose $\bfY$ satisfies

Tibshirani, R. (1992) viewed the principal curve problem in terms of a mixture model, which avoid the above bias.

Hence, define a principal curve of $g_\bfY$ to be a triplet $\{g_S, g_{\bfY\mid S}, \bff\}$ satisfying the following conditions

Generally, HS definition and the new definition are NOT the same except in special cases. Suppose $S\sim g_s$, $\bff(s)$ is linear, and

However, the assumption is somewhat unnatural, and violates the above second condition.

Other special cases for which a curve $f(s)$ is a principal curve under both definitions:

The log-likelihood has the form of a mixture,

A general theorem on mixtures given by Lindsay (1983) implies that for fixed $\bbf(s)$ and $\Sigma(s)$, the nonparametric maximum likelihood estimate of the mixing density $g_S$ is discrete with at most $n$ support points. Denote them by $a_1,\ldots,a_n$.

A remedy for these problem is to add a regularization component to the log-likelihood.

With a Length Constraint

Neither the HS nor this definition guarantees the uniqueness of principal curves.

Consider classes $\cS_1,\cS_2$, of curves of increasing complexity. For $k\ge 1$, let $\cS_k$ be the set of polygonal (piecewise linear) curves which have $k$ segments and whose lengths do not exceed $L$.

The empirical squared error is

In practice, propose a suboptimal method with reasonable complexity which also picks the length $L$ of the principal curve automatically. Also starts from the first PC, and then increase the number of segments by one by adding a new vertex to the polygonal line produced in the previous iteration.