an “embarrassingly parallel” method for Bayesian phylogenetic inference, annealed SMC, based on recent advances in the SMC literature such as adaptive determination of annealing parameters.

provides an approximate posterior distribution over trees and evolutionary parameters as well as an unbiased estimator for the marginal likelihood, which can be used to test the correctness of posterior simulation software.

The Bayesian paradigm is widely used in systematic biology, principally for the purpose of phylogenetic reconstruction as well as for evaluating the empirical support of evolutionary models.

Bayesian phylogenetic reconstruction and model selection involve an intractable sum over topologies as well as a high dimensional integral over branch lengths and evolutionary parameters. MCMC can be used to approximate posterior distributions.

One limitation shared by all MCMC-based marginal likelihood estimator is that they are generally biased.

SMC methods provides a flexible framework to construct unbiased estimators and past work has shown they can be very efficient in a phylogenetic context. One drawback caused by the high degree of flexibility that comes with SMC is that the phylogenetic SMC algorithms developed so far are non-trivial to adapt to existing MCMC-based phylogenetic frameworks.

The paper propose the so-called phylogenetic annealed SMC, a different construction based on annealed importance sampling (AIS), which yields an SMC method that is in a sense much closer to standard MCMC, while providing unbiased estimators of the marginal likelihood. The proposed method can directly make use of any existing phylogenetic MCMC proposals, a rich literature covering many kinds of phylogenetic trees.

A powerful feature of the general SMC framework is that the space on which the distributions $\pi_r$ are defined is allowed to vary from iteration to the next.

Several “bottom up” approaches have been proposed which allow more efficient reuse of intermediate stages of the Felsenstein pruning recursions. For these methods, the intermediate distributions are defined over forests over the observed taxa, and hence their dimensionality increases with $r$.

Someone use a sequence of targets where $\pi_r$ is a tree over the first $r$ tips. This construction is especially useful in scenarios where taxonomic data comes in an online fashion.

SMC has been used for Bayesian phylogenetic analysis based on infinite state-space evolutionary models or for joint inference of transition networks.

Someone has explored a combination of reversible jump methods with phylogenetic models.

One drawback of letting the dimensionality of $\pi_r$ vary with $r$ as all the above methods do, is that it makes it significantly harder to incorporate SMC into existing Bayesian phylogenetic inference packages. But the authors argue that in their method, the target distributions $\pi_r$ are all defined in the same space. The annealed SMC framework in this context utilizes MH kernels in the inner loop but combines them in a different fashion compared to standard MCMC algorithms, or even compared to parallel tempering MCMC algorithms.

In standard MCMC methods, we are interested in a single probability distribution, the posterior distribution. Reasons why we may use a sequence of distributions rather than only one:

An SMC proposal distribution $K_r(x_{r-1,k},x_{r,k})$ used to sample a particle for the next iteration given a particle from the previous iteration. Since $x_{r-1,k}$ and $x_{r,k}$ have the same dimensionality in our setup, it is tempting to use MCMC proposals $q_r(x_{r-1,k},x_{r,k})$ in order to build SMC proposals, such as subtree prune and regraft moves, and Gaussian proposals for the continuous parameters and branch lengths.

To avoid this, use as SMC proposal as the accept-reject Metropolis-Hastings transition probability based on $q_r$, called a Metropolized porposal.

In the annealed SMC algorithm, the weighting and proposal steps can be interchanged. This is different from standard SMC algorithms.

An estimate of the marginal likelihood $p(y)$ is given by the product of the average unnormalized weights. 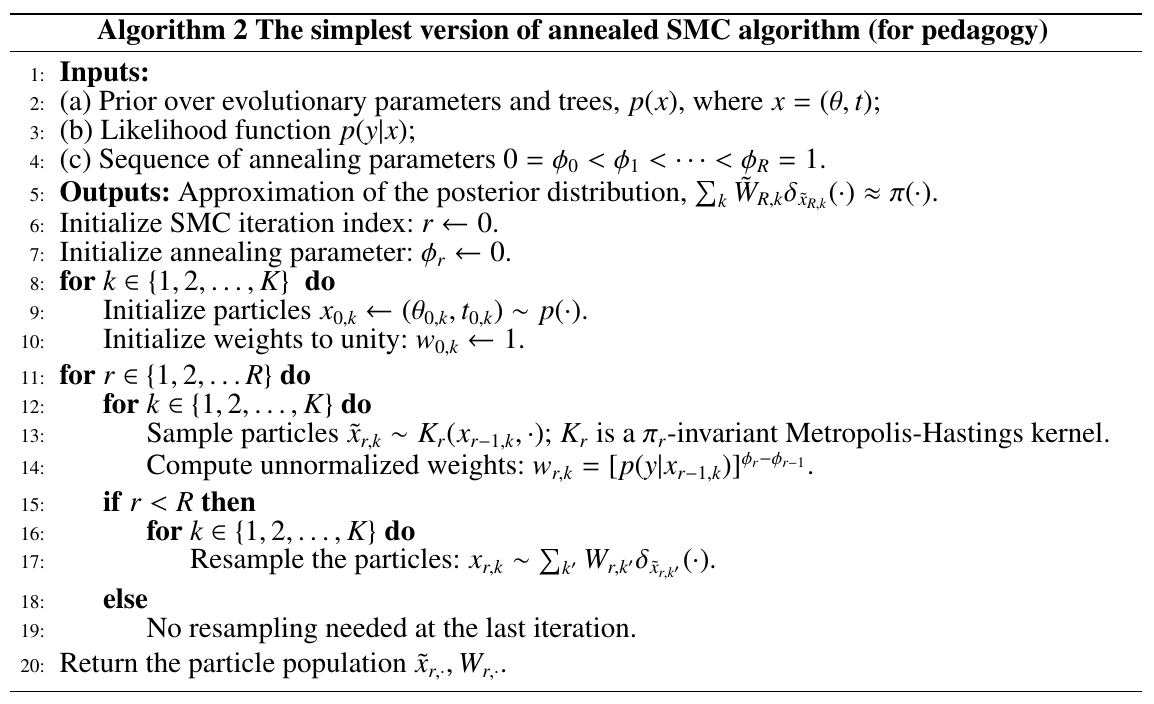 debiased adaptive annealed SMC: run the algorithm twice, a first time to adaptively determine the resampling and annealing schedules, and then a second independent time using the schedule fixed in the first pass.

Both adaptive methods rely on being able to assess the quality of a particle approximation.

Both Dynamic resampling and Adaptive determination of annealing parameters are based on relative conditional ESS, while the former need to trace back until the previous resampling step and the latter only focus on the degeneracy of a single iteration. 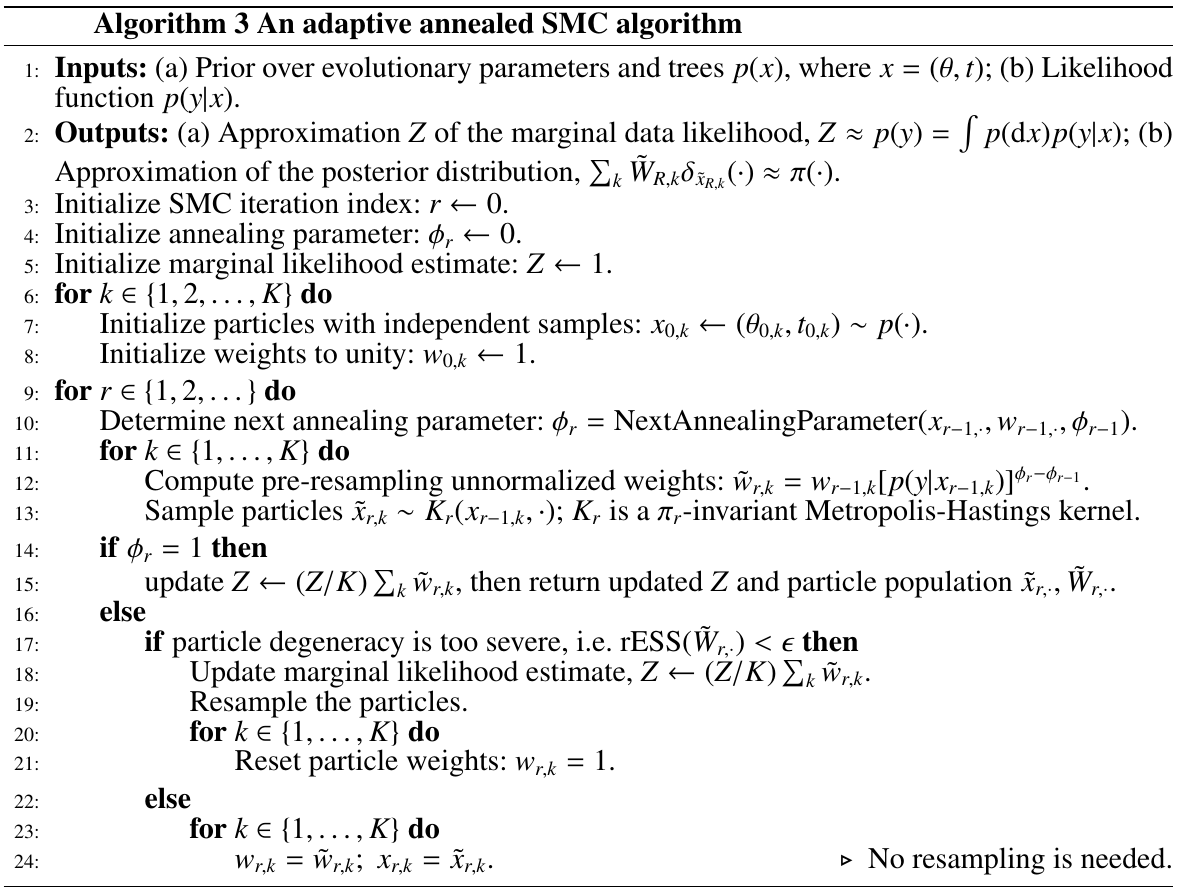