However, a connection between B-fields and SFRs has never been observed.

A comparison between the surveys of SFRs and a study of cloud-field alignment shows consistently lower SFRs per solar mass for clouds almost perpendicular regulator of SFRs.

The perpendicular alignment possesses a significantly higher magnetic flux than the parallel alignment and thus a stronger support of the gas against self-gravity. This results in overall lower masses of the fragmented components, which are in agreement with lower SFRs.

Clouds with a similar mass and age can have different SFRs, as shown in the following figure. 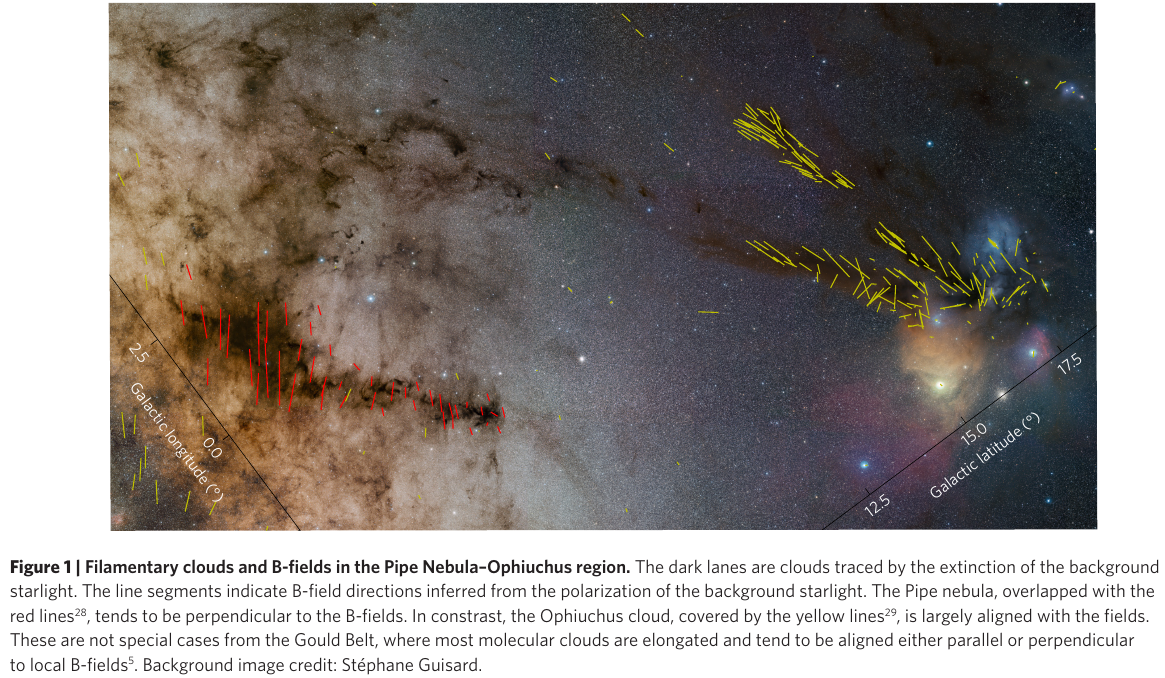 Figure 2 correlates the SFRmass$^{-1}$ with the cloud-field angles and shows that large-angle clouds hava consistently lower values of SFRmass$^{-1}$. Perform the permutation tests and Spearman rank correlation tests to determine the significance of this trend. 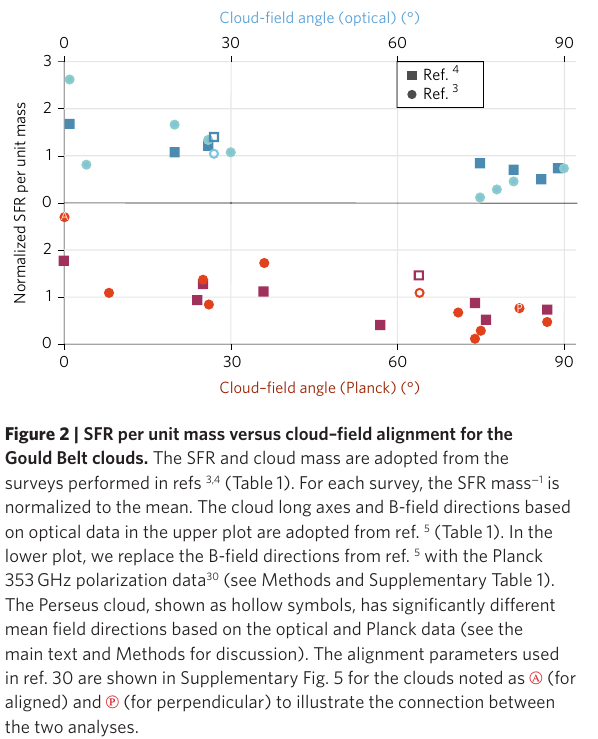 The dynamical importance of magnetic fields in molecular clouds has been increasingly recognized, as observational evidence has accumulated. However, how a magnetic field affect star formation is still unclear.

Their previous work: which demonstrate how the mean magnetic field orientation relative to the global cloud elongation can affect cloud fragmentation.

The paper shows that the mass cumulative function (MCF) of a cloud is also regulated by the field orientation.

The authors have conducted a series of studies on the connections between molecular cloud fragmentation and cloud-field offset (i.e., the misalignment between the ambient magnetic field direction and the cloud elongation).

The present study considers the effect of the cloud-field offset on the mass portion of gas in high density.

only use pixels with extinction higher than $A_{V_{trs}}$, the “transition density” of the column density probability density functions (N-PDFs), to construct the MCFs 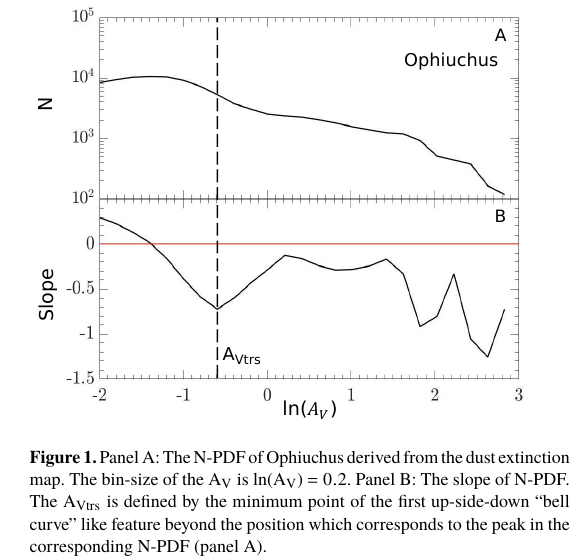 MCF is the amount of cloud mass that is above a given dust extinction, $\tilde A_V$,

The MCF slope is defined by 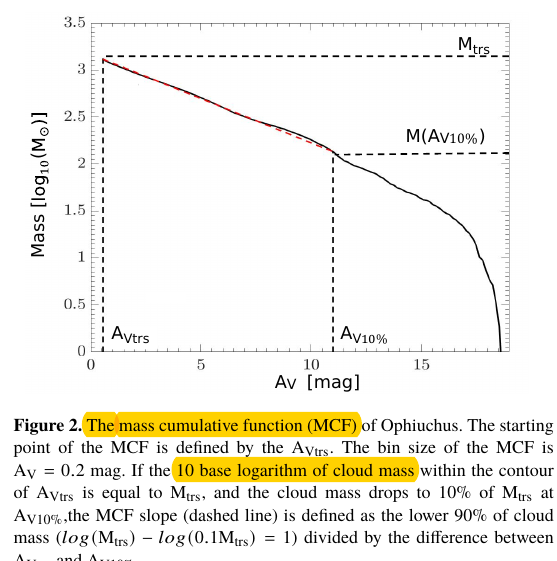 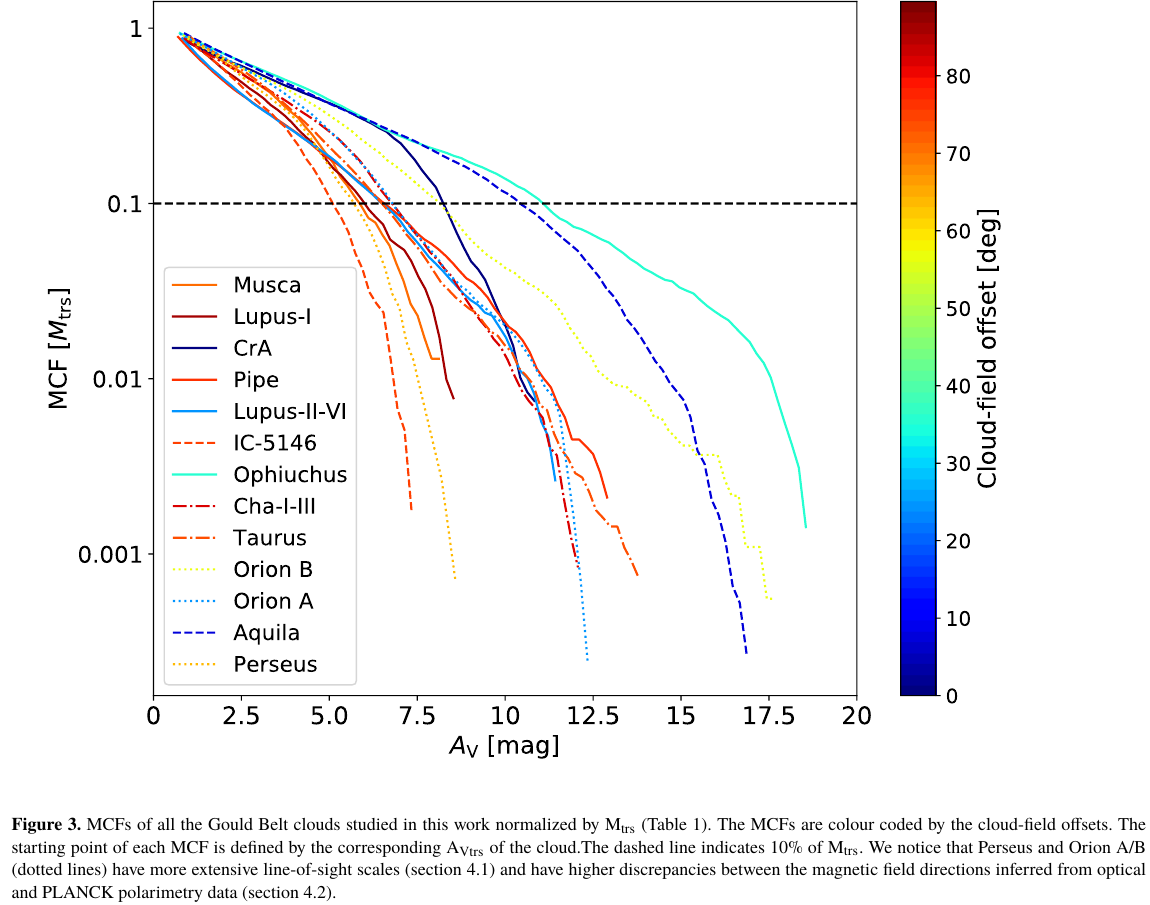 where $\mu_\small$ is the average MCF slope of the molecular clouds with cloud-field offsets < 45 degrees.

By the non-parametric permutation test, the resulting $p$-value is 0.01.

The potential uncertainties in the MCF slopes arising from