Several recent multitarget tracking formulations aim to obtain a (nearly) globally optimal set of trajectories within a temporal window. To make (near) global optimization possible and efficient, the state space is reduced by restricting the possible target locations to a finite set and the energy is simplified.

The energy depends on the locations and motions of all targets in all frames, including cases where image evidence is missing, and explicitly includes physical constraints, such as smoothness of motion and mutual exclusion.

the common objective of energy minimization methods is to - set up a function that assigns every possible solution a cost (the “energy”) and then (approximately) find the state with the lowest cost.

a dilemma: should the energy function be simplified until it is easily optimizable, or should it rather have the power to capture the complex situation, at the cost of less graceful mathematical properties?

There energy function is a linear combination of six individual terms:

The aim is then to find the state $X^\star$ that minimizes the high-dimensional continuous energy form:

Likely pedestrian locations are found with a sliding-window linear SVM detector. - the features employed in the detector include histograms of oriented gradients (HOG) and histograms of relative optic flow (HOF) - detection peaks are found by nonmaxima suppression (NMS) and projected onto the ground plane of the world coordinate system, where they form the image evidence for tracking.

Use the standard conjugate gradient method. Upon convergence, a jump move is executed (unless it would increase the energy), which may change the dimensionality of the models. The jumps give the optimization a high degree of flexibility–the initial solution need not even have the correct number of targets. 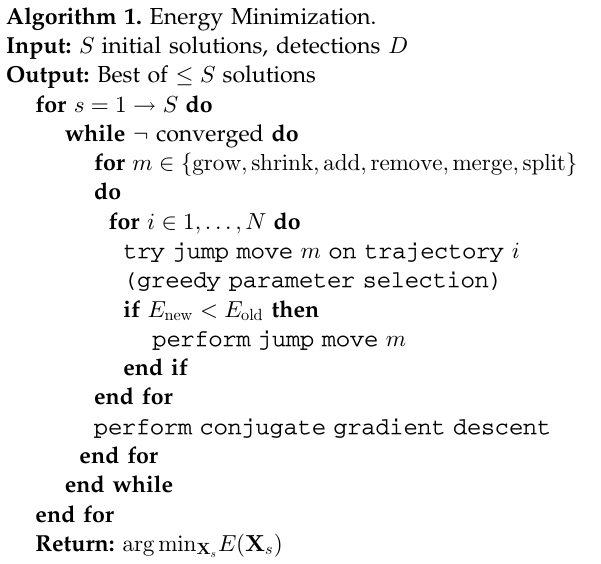 Like any nonconvex optimization, the result depends on the initial value from which the iteration is started. They propose to use the output if an arbitrary simpler tracker as a more qualified initial value. In their experiments, they used per-target extended Kalman filters (EKFs) where the data association is performed in a greedy manner using a maximum overlap criterion.