The accuracy of state-of-the-art object detectors is still far from perfect. The detection performance is usually a tradeoff between the detection rate and the false alarm rate.

the paper aims to

Given detection responses generated by the detector, the tracking method needs to retrieve the real objects among these responses and set ID for each of them in every frame. Two strategies to deal with the data association problem,

To overcome the drifting problem of local association method,

observations are generated by applying a detector on each cell video frame.

The final aim is to find the optimal trajectories for all the objects based on the observation set. It is equivalent to maximize the posteriori probability of $S_{1:t}$ giving the observations $O_{1:t}$:

Since the number of all possible enumerations of $S_{1:t}$ given $O_{1:t}$ is huge, it prevents a brute force search to find the global optimum.

this could be done by a particle filter, and denote the tracklet set generated as $S_{1:t}^+$.

three types of occlusion due to the causation:

A human hypothesis consists of three overlapped part areas of the human body. Denote the detection response as a 6-tuple $rp = {l, p, s, t, v, a}$, where

A human hypothesis $H$ can be represented as ${rc, u}$ where $u$ indicates the visible part. - if $u$ is none of three response types, it means the human is not visible

if the object state can not be observed (all the parts are invisible or lost by the observation model), the local tracklet filtering stage on this object stops and the tracklet is buffered for the global stage.

at each frame within the temporal sliding window, 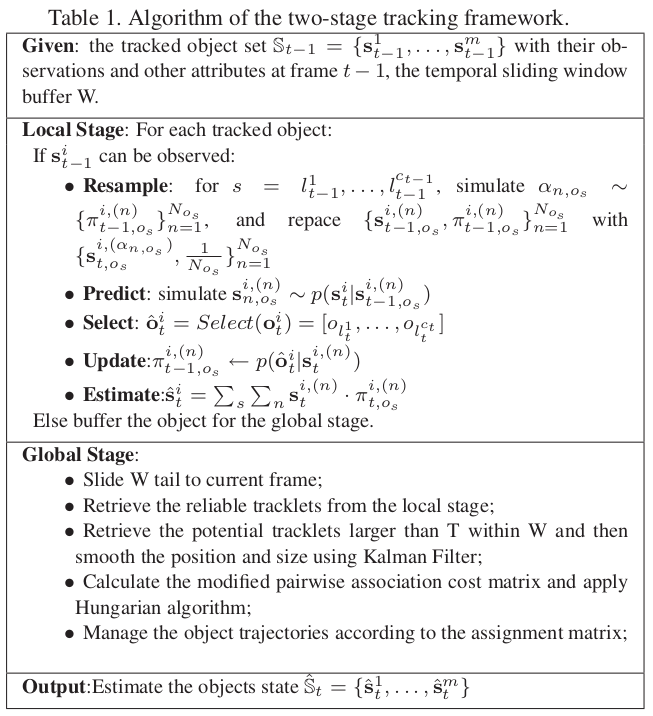 in the local stage, the observers know the location of the object, as said in

When the system has a reliable observation model, the state of the object can be well updated. This corresponds to the situation when one object is isolated from other objects and the detector can generate good observations.

But in the dense environment where multiple objects are close to each other and not all of the human bodies are fully visible, the detector will fail to generate reliable observations or even give wrong responses. … …propose to select the best subset of corresponding observations in the particle filter procedure. … the select procedure selects the best subset $\hat o_t = (…)$.

so is it true to say a state has multiple observation candidates?

is it true that the local stage does not involve any association, and the observer can directly observe the object?

and the global optimum trajectories for all tracked objects