MARS takes the form of an expansion in product spline basis functions, where the number of basis functions as well as the parameters associated with each one (product degree and knot selections) are automatically determined by the data.

This procedure is motivated by the recursive partitioning approach to regression and shares its attractive properties, but

Goal: model the dependence of a response variable $y$ on one or more predictor variables $x_1,\ldots,x_n$ given realizations (data) ${y_i,x_{1i},\ldots,x_{ni}}_1^N$. Suppose the data is generated from

over some domain $(x_1,\ldots,x_n)\in D\subset \IR^n$, then the aim of regression analysis is to use the data to construct a function $\hat f$ that can serve as a reasonable approximation to $f(x_1,\ldots,x_n)$ over the domain $D$ of interest.

Lack of accuracy is often defined by the integral error

or the expected error

If future joint covariate values $\bfx$ can only be realized at the design points, then $E$ is appropriate; otherwise $I$ is more relevant.

Fit a parametric function $g(\bfx \mid {a_j}_1^p)$, and the coefficient is estimated by

The ability of the nonparametric methods to often adequately approximate functions of a low dimensional argument, coupled with their corresponding inability in higher dimensions, has motivated approximations that take the form of expansions in low dimensional functions

where each $\bfz_j$ is comprised of a small (different) preselected subset of ${x_1,\ldots,x_n}$.

In statistics, adaptive algorithms for function approximation have been developed based on two paradigms,

it uses an approximation of the form

that is, additive functions of linear combinations of the variables.

The univariate function $f_m$ ans the corresponding coefficients of the linear combinations appearing in their arguments, are jointly optimized to produce a good fit to the data based on some distance criterion.

It takes the form

where ${R_m}_1^M$ are disjoint subregions and the most common for $g_m$ is a constant function.

Cons: some fairly severe restrictions that limit its effectiveness

Replace the geometrical concepts of regions and splitting with the arithmetic notions of adding and multiplying.

where the basis functions $B_m$ take the form

Let $H[\eta]$ be a step function indicating a positive argument

and let $LOF(g)$ be a procedure that computes the lack-of-fit of a function $g(\bfx)$ to the data. 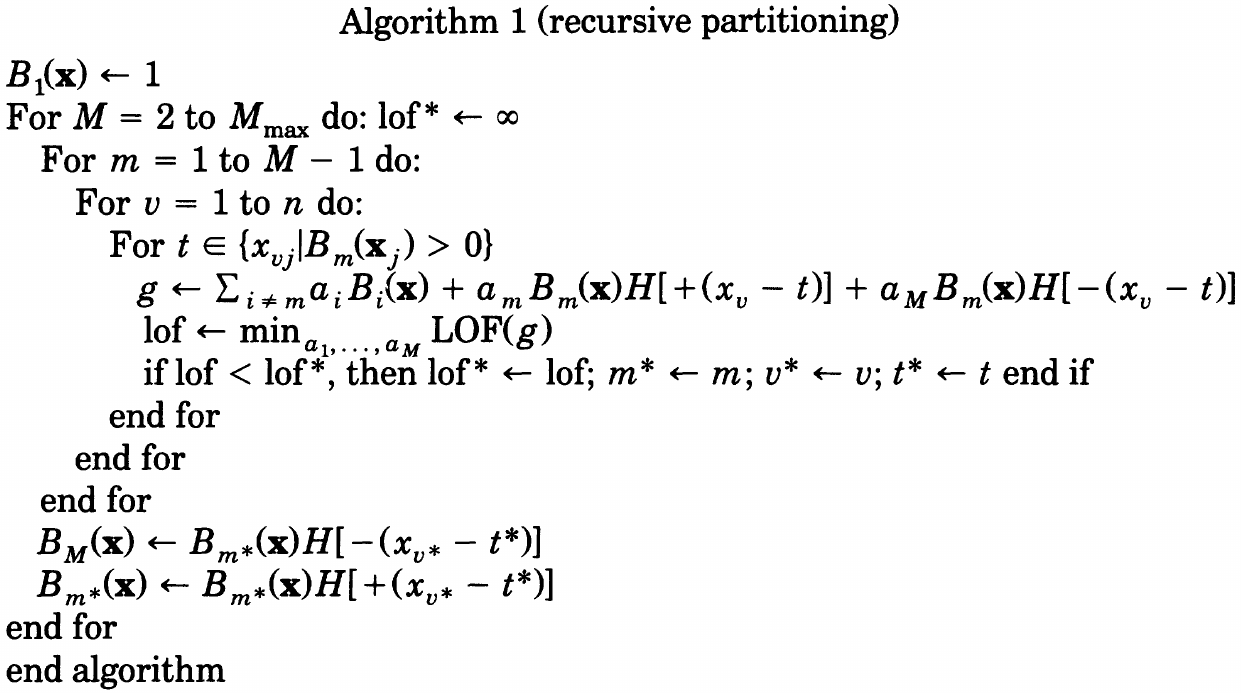 The basis functions produced by Algorithm 1 have the form

The only aspect of Algorithm 1 that introduces discontinuity into the model is the use of the step function $H[\eta]$ as its central ingredient.

A two-sided truncated power basis is a mixture of functions of the form,

The step functions can be seen to be two-sided truncated power basis functions for $q=0$ splines.

but the resulting basis will not reduce to a set of tensor product spline basis functions.

Permitting repeated (nested) splits on the same variable is an essential aspect contributing to the power of recursive partitioning.

This strategy also resolves the dilemma in the last section.

In summary, the modifications are

With the above modification, and consider $q=1$, we obtain the following MARS algorithm, 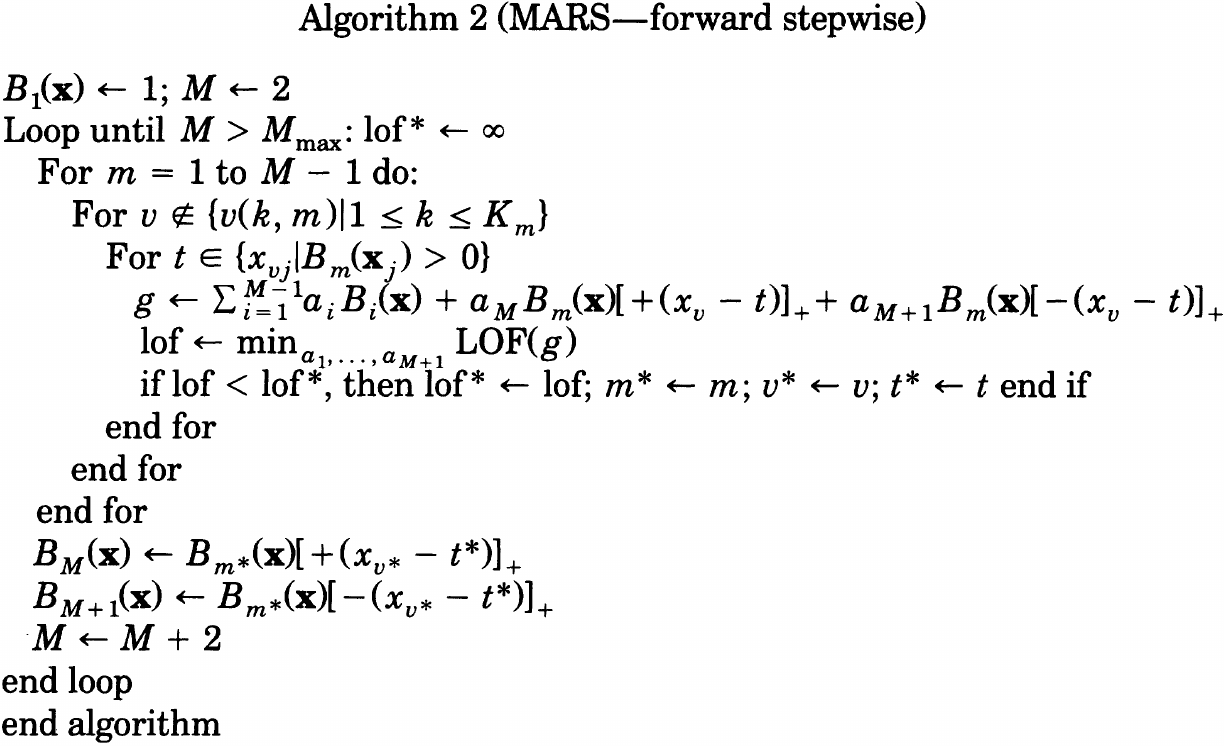 Unlike recursive partitioning, the corresponding regions are not disjoint but overlap, and hence removing a basis function does not produce a hole. A usual backward procedure can be applied, 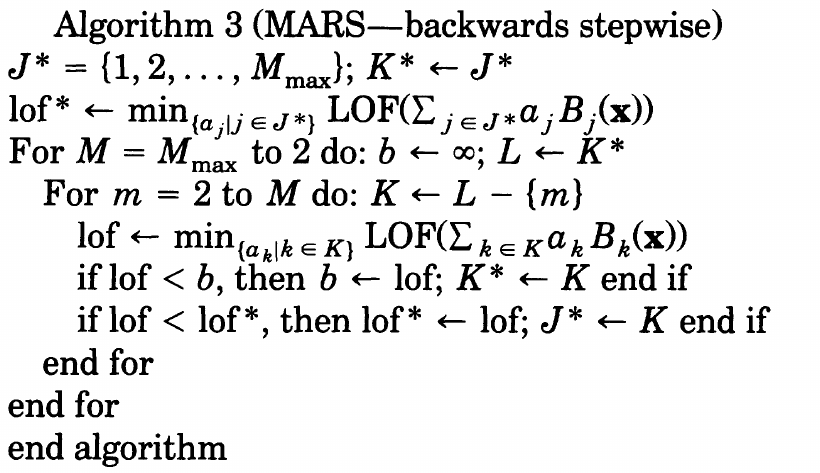 The result of applying Algorithm 2 and 3 is a model of the form,

which can be recast into

The GCV criterion is the average-squared residual of the fit to the data (numerator) times a penalty (inverse denominator) to account for the increased variance associated with increasing model complexity.

A cost complexity function is proposed to be

and the quantity $d$ represents a cost for each basis function optimization and is a (smoothing) parameter of the procedure (!!). Larger values for $d$ will lead to fewer knots being placed and thereby smoother function estimates.

One method for choosing a value for $d$ in any given situation would be to simply regard it as a parameter of the procedure that can be used to control the degree of smoothness imposed on the solution. Their simulations suggest that

the difficulty with higher order regression splines centers on so called end effects.

with a corresponding truncated cubic function of the form 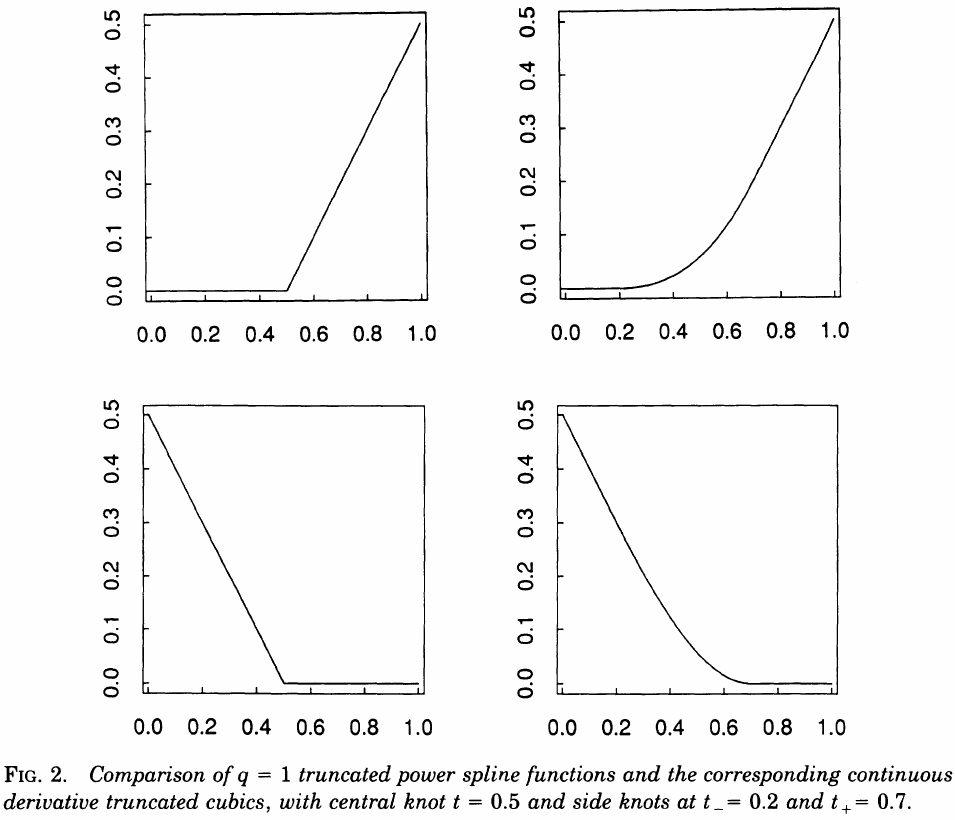 the goal is to try to gain some understanding of its properties and to learn in what situations one might expect it to provide better performance than existing methodology.

where $\hat f(\bfx)$ takes the form of the MARS approximation, and $g_j(\bfx)$ are provided by user.

The problem is even more serious for (interactive) MARS modeling than for additive or linear modeling.

Since MARS uses a model selection criterion based on squared-error loss, it is not robust against outlying response values.

Use robust/resistant linear regression methods would provide resistance to outliers. The only advantage to squared-error loss in the MARS context is computational.

Aim of MARS: combine recursive partitioning and spline fitting in a way that best retains the positive aspects of both, while being less vulnerable to their unfavorable properties.