Multiple human tracking (MHT) is a fundamental task in many computer vision applications.

Appearance-based approaches, primarily formulated on RGB data, are constrained and affected by problems arising from occlusions and/or illumination variations.

In recent years, the arrival of cheap RGB-depth devices has led to many new approaches to MHT, and many of these integrate colour and depth cues to improve each and every stage of the process.

The paper also presents a brief comparative evaluation of the performance of those works that applied their methods to these datasets.

Human tracking is a key component in many computer vision applications, including

They are usually centred around RGB sensors and are characterized by a variety of limitations, such as occlusions due to cluttered or crowded scenes and varying illumination conditions.

The vast literature landscape in this research area has widened even further in the last few years, due to the introduction and popularity of low-cost RGB-depth cameras. This has enabled the development of new algorithms that integrate depth and colour cues to improve detection and tracking systems.

Aim: summarise and focus on the area of multiple human tracking (MHT) from the combination of colour (RGB) and depth (D) data.

Not review methods based only on RGB features, but refer to the reviews by

The paper provide a review of the state-of-the-art on MHT algorithms that integrate depth and colour data, characterising them based on

In MHT, detections of multiple people are normally aggregated into independent tracks, one for each person, in order to establish their respective trajectories. Tracks may contain position, motion, and appearance descriptions.

A variation to the common pipeline:

Static appearance model may be built from one or a few initial frames and remain fixed for the duration of the trajectories’ lifetime, while dynamic appearance models may be derived from all previous observations of the target or from a sliding window. Such models are updated as new observations become available, in order to account for varying appearances, due to different body orientation relative to the sensor or changing illumination conditions.

Depth data can be exploited to enhance RGB-based MHT. 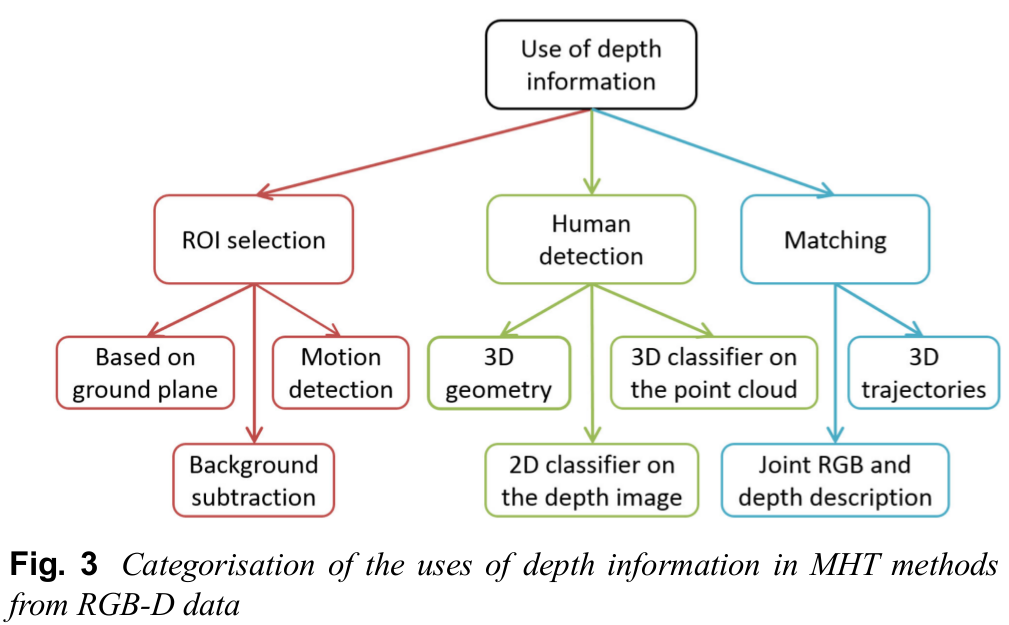 The generic description of a person that drives the detection stage, is often made up of a number of RGB and depth cues. Possible generic person description from RGB data:

the motion model determines target’s velocity approximately by the mean and variance of its depth variations in the past ten frames.

Galamakis et al. model motion as the target’s speed, computed between the last two frames, and use it to predict the next position of the target, assuming a constant velocity.

MuHyT: a tree of association hypothesis in a multi-hypothesis tracker framework, where matching probabilities for all past and current frames are computed from closeness to position and velocity predictions, and from appearance similarity. The MuHyT grows a hypothesis tree, pruned to the $k$-best hypotheses at each iteration in order to prevent exponential growth of the tree.

Munoz Salinaz et al. The matching stage finds the globally optimal associations of detected candidates to existing tracks using the Hungarian method. The matching likelihoods are computed from the distance to the predicted position and the similarity to the colour histogram appearance model.

Munaro et al. find the optimal assignment of detections to tracks in a Global Nearest Neighbour framework. Their matching likelihoods are obtained from the distance to the predicted position and velocity.

Almazan and Jones: mean-shift algorithm to find the ROI that best matches the appearance model of a target. Then with Kalman filter.

implement the first-order motion model in a particle filter framework. A potential drawback of this is that particles filters tends to be computationally expensive and may require optimisations to achieve practical running times. Munoz Salinas et al.: one particle filter is used per track, using a constant speed model to predict the next location of the target, and new target observations are searched for by maximising a detection probability.