This note is based on Zhou, T., Sengupta, S., Müller, P., & Ji, Y. (2019). TreeClone: Reconstruction of tumor subclone phylogeny based on mutation pairs using next generation sequencing data. The Annals of Applied Statistics, 13(2), 874–899.

Using NGS data, infer $\cT,C,Z$ and $w$ based on a simple idea that variant reads can only arise from subclones with variant alleles consistent with an underlying phylogeny.

The paper leverage the power of using mutation pairs over single SNVs to incorporate partial phasing information in our model.

Impose the phylogenetic tree structure in the prior of $Z$ greatly strengthens inference.

The proposed model structure versus a traditional use of phylogenetic trees. 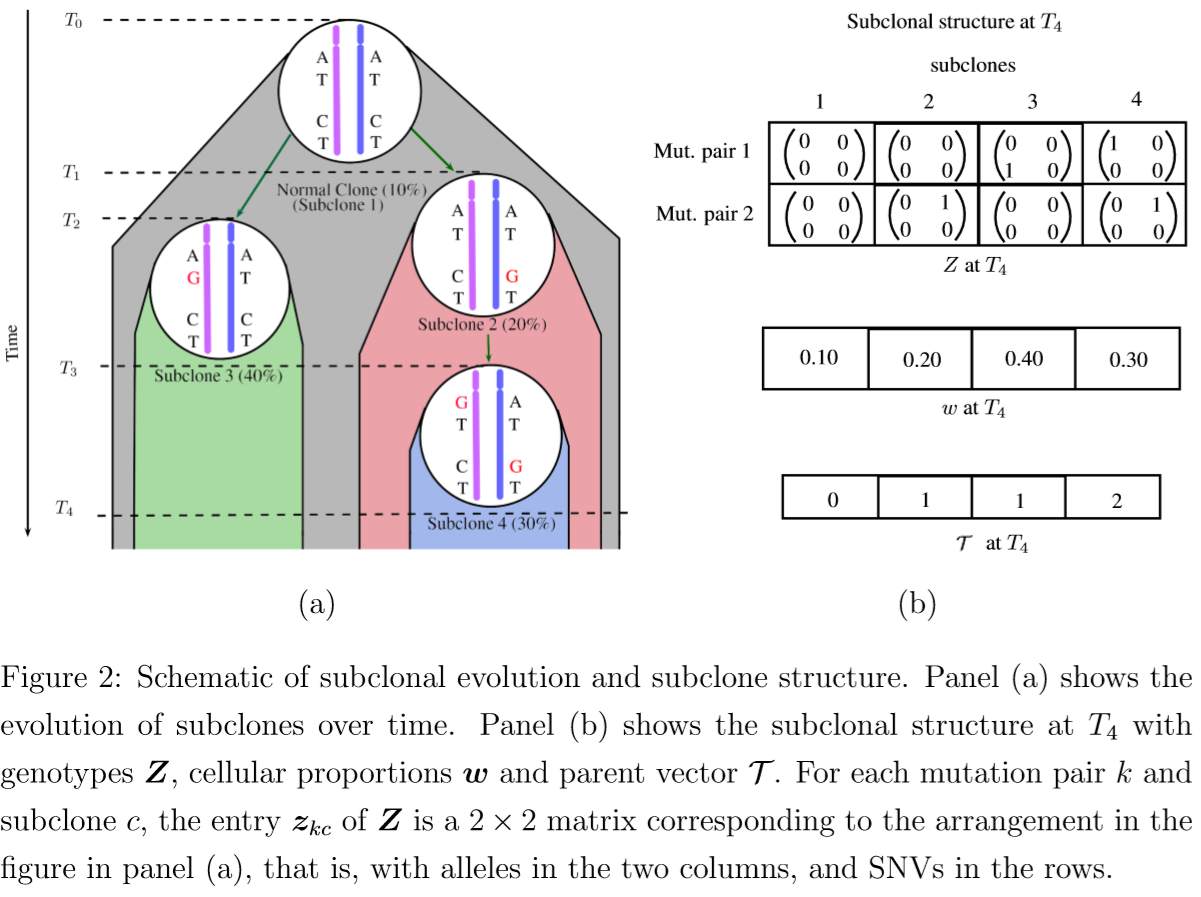 Assume $z_{kcjr}$ can only take two possible values, with $z_{kcjr}=1$ (or $0$) indicating that the corresponding locus has a mutation (or does not have a mutation) compared to the reference genome.

$w_{t1}$: the proportion of normal cells contamination in sample $t$.

Assume a multinomial sampling model for the observed read counts

For a short read $s_{tki}$, depending on whether it covers both loci or only one locus, consider these cases

(No order? but why here again consider order?)

Let $v_{tki}$ be the probability of observing a short read of type $(i)$. Conditional on cases (i), let $\tilde p_{tkg}$ be the conditional probability.

Express $\tilde p_{tkg}$ in terms of $Z$ and $w$ based on the following generative model (?) in three steps.

Consider a sample $t$. To generate a short read,

the prob. of observing a short read $s^{(g)}$ from subclone characterized by $z_{kc}$ by

the marginal prob. of observing a short read $s^{(g)}$ from the tumor sample $t$ with $C$ subclones with cellular proportions ${w_{tc}}$ as

where the last term introduces the notion of a background subclone, indexed as $c=0$ and without biological meaning, to account for noise and artifacts in the NGS data (sequencing errors, mapping errors, etc.)

Construct a hierarchical prior model,

construct a prior for $Z$ based on a generative model

Next, for a mutation pair that gains one new mutation, assume the new mutation randomly arises in any of the unmutated loci in the parent subclone.

Update $Z$ by row with

split the data into a training set and a test set