For a given time series, how to choose appropriate values for $p, d, q$

For $MA(q)$ models, the ACF is zero for lags beyond $q$, so the sample autocorrelation is a good indicator of the order of the process.

To help to determine the order of autoregressive models, a function may be defined as the correlation between $Y_t$ and $Y_{t-k}$ after removing the effect of the intervening variables $Y_{t-1}, Y_{t-2},\ldots, Y_{t-k+1}$. This coefficient is called the partial autocorrelation at lag $k$.

There are several ways to make the definition precise.

If $\{Y_t\}$ is a normally distributed time series, let

The sample partial autocorrelation function (PACF) can be estimated recursively.

The EACF method uses the fact that if the AR part of a mixed ARMA model is known, “filtering out” the autoregressive from the observed time series results in a pure MA process that enjoys the cutoff property in its ACF.

As the AR and MA orders are unknown, an iterative procedure is required. Let

To avoid overdifferencing, we recommend looking carefully at each difference in succession and keeping the principle of parsimony always in mind—models should be simple, but not too simple

Order determination is related to the problem of finding the subsets of nonzero coefficients of an ARMA model with sufficiently high ARMA orders. A subset $ARMA(p, q)$ model is an $ARMA(p,q)$ model with a subset of its coefficients known to be zero. For example, the model

is a subset ARMA(12, 12) model useful for modeling some monthly seasonal time series. 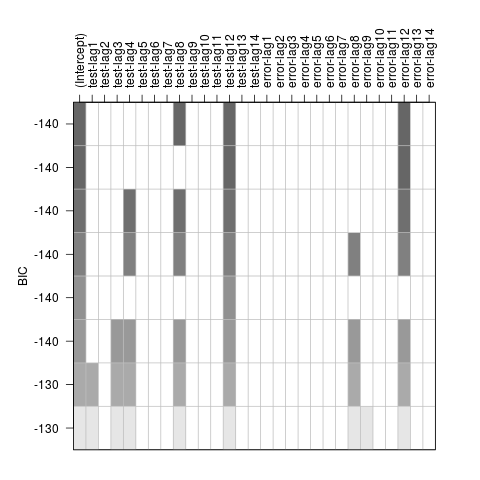