move from the finite training data $\cD$ to a function $f$ that makes predictions for all possible input values.

where the mean is also its mode, which is also called the maximum a posterior (MAP) estimate of $w$.

In a non-Bayesian setting, the negative log prior is sometimes thought of as a penalty term, and the MAP point is known as the penalized maximum likelihood estimate of the weights.

To make predictions for a test case, we average over all possible parameter values, weighted by their posterior probability. Thus the predictive distribution for $f_\star$ at $x_\star$ is given by averaging the output of all possible linear models w.r.t. the Gaussian posterior,

Projections of Inputs into Feature Space

kernel trick: if an algorithm is defined solely in terms of inner products in input space then it can be lifted into feature space by replacing occurrences of those inner products by $k(x,x’)$.

A Gaussian process is a collection of random variables, any finite number of which have a joint Gaussian distribution.

A GP is completely specified by its mean function and covariance function,

The specification of the covariance function implies a distribution over functions. We can draw samples from the distribution of functions evaluated at any number of points.

The SE covariance function in one dimension has the following form 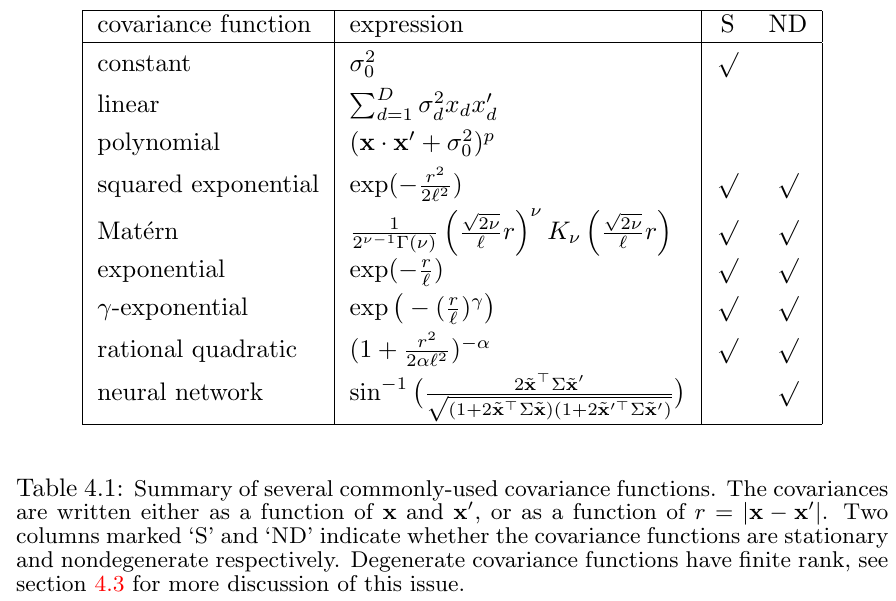 The Matérn Class of Covariance Functions

if $\alpha\rightarrow\infty$, the limit of the RQ covariance is the SE covariance function