What least squares has to do with neural networks

In some problems, the number of parameters $p$ is so large that training effectively moves each of them just a small amount w.r.t. some random initialization $\theta_0\in\bbR^p$. It thus makes sense to linearize the model around $\theta_0$.

Further, supposing that the initialization is such that $f(z;\theta_0)\approx 0$, and letting $\theta = \theta_0+\beta$, then

Therefore, we are led to consider a linear regression problem, with random features $x_i=\nabla_\theta f(z_i;\theta_0),i=1,\ldots,n$ of high-dimensionality ($p$ much greater than $n$).

In this setting, many vectors $\beta$ give rise to a model that interpolates the data. However, using gradient descent on the least squares objective for training yields a special interpolating parameter $\hat\beta$ (having implicit regularity): the least squares solution with minimum $\ell_2$ norm.

The authors recover, in a precise quantitative way, several phenomena that have been observed in large-scale neural networks and kernel machine, including “double descent” behaviour of the prediction risk, and the potential benefits of overparametrization.

Analyze the out-of-sample prediction risk of the minimum $\ell_2$ norm (min-norm, for short) least squares estimator, in an asymptotic setup where both the number of samples and features diverge, $n,p\rightarrow \infty$, and their ratio convergences to a nonzero constant, $p/n\rightarrow \gamma\in (0,\infty)$. 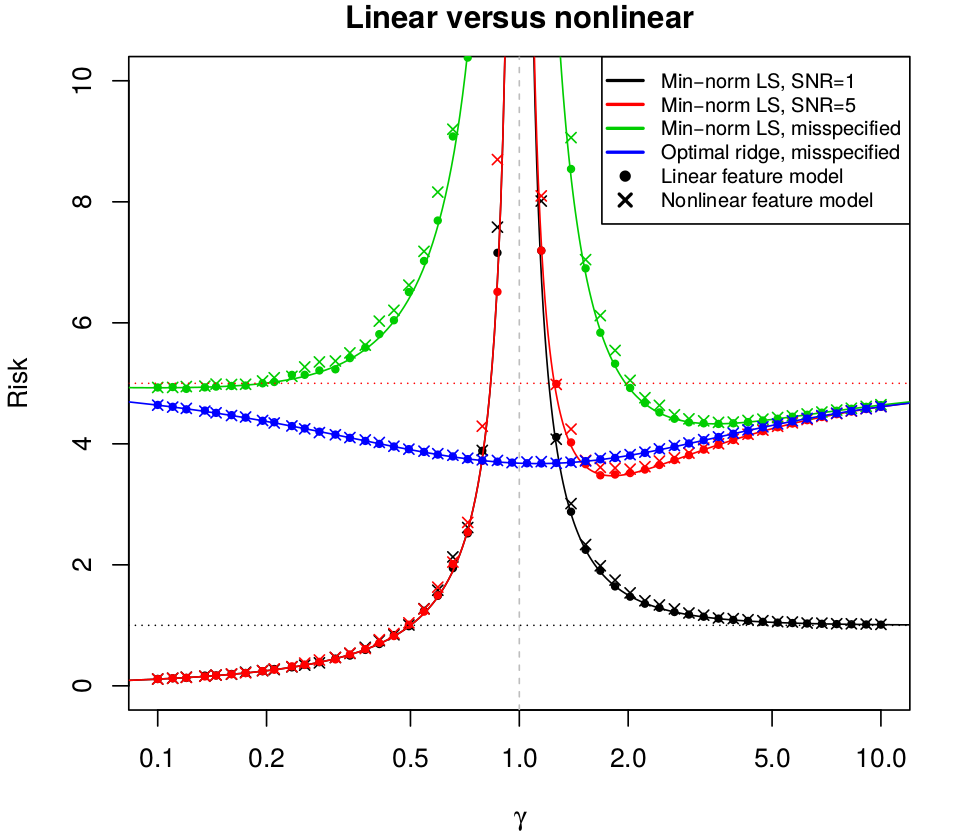 The focus throughout this paper is out-of-sample prediction risk.

For the two models, the in-sample prediction risk of the min-norm least squares estimator $\hat\beta$ is

The following simple Julia snippet can be used to validate the above relationship.

It is worthy noting that early stopped gradient descent is known to be closely connected to ridge regularization.

A tight coupling between the two has been recently developed for least squares problems. This coupling implies that optimally-stopped gradient descent will have risk at most 1.22 times that of optimally-tuned ridge regression, and hence will often have better risk than min-norm least squares.

In practice, we would not have access to the optimal tuning parameter for ridge, and would rely on CV. The theory shows that for ridge regression, CV tuning is asymptotically equivalent to optimal tuning.

Historically, the debate between interpolation and regularization has been alive for the last 30 or so years.

It is unclear whether the success in precisely analyzing the linear model setting should carry over to the nonlinear setting. Remarkably, under high-dimensional asymptotics with $n,p,d\rightarrow\infty,p/n\rightarrow \gamma$, and $d/p\rightarrow\psi$, this turns out to be the case.

There is a critical difference between neural networks and the studies in this paper: in a neural network, the feature representation and the regression function or classifier are learned simultaneously. In both linear and nonlinear model settings, the features $X$ are not learned, but observed.

For an estimator $\hat\beta$ (a function of the training data $X, y$), define its out-of-sample prediction risk

It has the bias-variance decomposition

Generally, the risk function measures the accuracy of an estimator $\delta(\theta)$ for parameter $\theta$, $R(\theta,\delta) = E_\theta[L(\theta, \delta(X))]$. Two natural global measures of the size of the risk are the average $\int R(\theta, \delta)w(\theta)d\theta$ (Bayes) and the maximum $\sup_\Omega R(\theta,\delta)$ (minimax).