A Stochastic Model for Evolution of Metabolic Network

Consider a metabolic network represented as a hypergraph.

Suppose the current state is $G$, the next state is characterized by insertion or deletion of a single hyperedge from the current network.

assume each hyperedge evolves separately, the corresponding Markov chain can be described by a 2x2 rate matrix (seems that it also assumed change one point one time, hence firstly select the position to change and then apply the rate matrix, is that OK?)

the transition probability matrix is

problem: the reactions in metabolic networks do not evolve independently.

hyperedge are inserted or deleted depending on their neighbors.

the neighbor-dependent model relates to the preferential attachment property reported for metabolic network evolution and produces a behavior such that highly connected hyperedges are added or removed more frequently than those hyperedges which have very few neighbors.

where $q(x_i, x_i’)$ is the appropriate entry from the rate matrix $Q$ (but only two choice, right? since there must be a change according to the assumption), and the neighborhood component

Note that the neighbors are defined via the reference network.

which agree with the results in the supplementary material.

Successive networks during the course of evolution differ only by a single edge. At each step, an edge is either inserted or deleted from the network. We refer to the addition or deletion of an edge as an event and define a path between two networks as a sequence of events that transform the first network to the second.

In general, the likelihood value can be obtained by integrating over variables $t_i, 1\le i\le k$ such that $0\le t_1\ldots\le t_k\le 1$ as follows

which can be calculated by the trajectory likelihood algorithm.

Metabolic network data were extracted from the KEGG database for three different pathway maps across four species belonging to the genus Pseudomonas.

The basic information for each network is given in the following Supplementary Table 1.

For example, MAP00030 in P.fluorescens Pf0-1 contains 26 out of a possible 43 reactions, of which 17 are reversible, requiring 43 hyperedges in the reconstructed network.

current metabolites: Compounds such as H2O, CO2, ATP and other ubiquitous metabolites, and were ignored.

Apply the Gibbs sampler on the metabolic networks. Evolution parameters were estimated for evolution between two independent pairs,

In a separate study, the authors identified hyperedges that were common to or absent from nine genome sequenced strains of Pseudomonas. To study the effects of core and prohibited hyperedges in the model, use

then estimate the parameters for the evolution of metabolic networks with and without core and prohibited edges in the model using the Gibbs sampler. 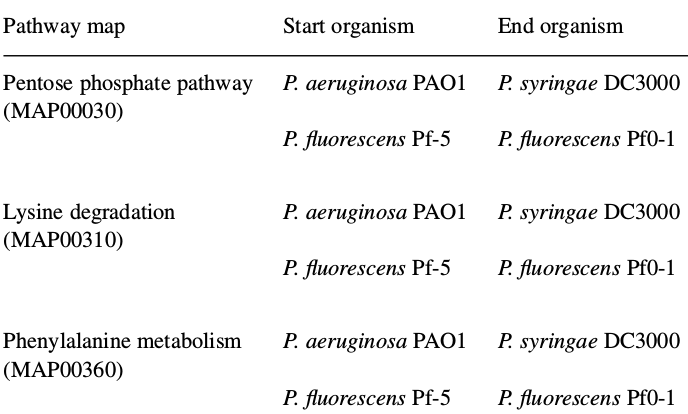 The simulation results suggest that the neighbor-dependent model produces a behavior where highly connected nodes tend to go through a high number of insertions thus agreeing with the common notions of “popularity is attractive” and preferential attachment for biological networks.

In a metabolic network, this model favors the insertion of edges that complete pathways and connect metabolites to hub metabolites, and favors deletion of non-core edges that correspond to redundant connections in a network.

The evolution of metabolic networks is complex and involves other factors such as response to environmental, developmental or physiological stimuli as well as lateral gene transfers that are not addressed by this model.

In addition, ortholog (直系同源) and synteny (同线型) data could be used to weight each hyperedge. The idea being that if a reaction is present in most of the species that are evolutionarily close to the one being considered then it has higher chances of being added, and if it is genetically linked to other reactions then they have a greater chance of being consecutively added or deleted.